History of the Encampment

Over its 70 plus years, East Texas Baptist Encampment has provided a place for the churches of Southeast Texas to retreat from the world and be refreshed by a personal experience with God. The camp has grown from its humble beginnings back in 1945 to a modern camp and conference center deep in the heart of Southeast Texas's piney woods.

In the fall of 1943 the association of churches in Southeast Texas saw a need to provide the young people in the area a recreation and outdoor activity camp that would serve as an extension of the local church ministry. That need developed into the mission of East Texas Baptist Encampment. A committee was formed to find a suitable location for a camp. At the same time, Pastor Woodrow Sherman and his church in Newton began earnestly seeking an area for a camp. Together, the current location was founded upon an abandoned Civilian Conservation Corp site on 82 acres. A layman in the area, Mr. A.H. Kennerly, offered to voluntarily pay one half of the purchase price of $10 per acre for the land. On October 18, 1944, the deal was sealed, and East Texas Baptist Encampment, and the vision of the pastors and laymen in the area, was beginning to be realized. On August 7, 1945, a dedication ceremony took place under a brush arbor, and the camp grounds were dedicated to the service of Jesus Christ.

Following the dedication of the camp, plans were immediately made to implement the vision of East Texas Baptist Encampment. The first scheduled encampment activities were for the Royal Ambassadors and Girls Auxiliary. During the Royal Ambassador Camp over 500 were registered, and sleeping cots were located in Louisiana and delivered in the early morning hours after registration. During the 60 years East Texas Baptist Encampment has been in existence, many young people and adults have had life changing experiences for the Lord. Today, several trustees, camp counselors, local pastors, and youth ministers can recall when they, too, attended camp and let Jesus into their heart!

Before there could be any programmed activities at East Texas Baptist Encampment, facilities had to be planned and constructed. Immediately following the dedication service of the encampment, plans were in motion to bring electricity to the site. A small tabernacle, two small dormitories with rest rooms and showers, and ten cabins were constructed. Also $750.00 was voluntarily donated toward the installation of a swimming pool. In 1949, a Tabernacle with a seating capacity of 350 was constructed, along with a kitchen and dining room.

East Texas Baptist Encampment has seen much construction activity and physical growth over the years. It was enlarged by an additional 23.17 acres in 1953, 12.8 acres of adjoining land in 1977 to allow for more nature and hiking trails, and almost six acres in 1981 to increase the size of the lake which allows for more canoeing and fishing activities. In 1969, the Tabernacle and dining room were air conditioned and heated (to allow for more year round use), the dining room was expanded, basketball and volleyball courts were constructed, and other construction activities have occurred. In 1984 construction on a 33 room motel-type facility and Worship Center began, allowing the camp to expand its programming to include a more diverse age group and year round programs in fulfilling the encampment's vision.

East Texas Baptist Encampment has been blessed with personnel dedicated to the encampment, and dedicated to the vision of the encampment. Mr. T.S. Huff was employed to serve as the Manager in 1961, and dedicated his life to serving at the encampment until his retirement in 1970. At that time, the Trustees of the encampment called Mr. Sam Farris to be the Camp Manager. Bro. Sam oversaw many changes to the camp, programs, and the lives of attendees until his retirement in December, 1990. Bro. Sam was followed by Van Lowe. He, too, witnessed many changes in the lives of those who attended the camps. Programs were added, and the camp began operating during more times of the year. Mr. Lowe retired in 2002, and the camp Trustees called Bro. Wayne Davis as camp manager. Others have also served the encampment with dedication. Mrs. Shirley DuBose was the camp cook for over 25 years. The Trustee Emeritus, Mrs. Lou Williamson served as a Trustee for over 30 years. Also the countless numbers of pastors, staff, and volunteers who have worked or brought groups to the encampment. 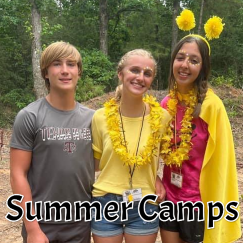